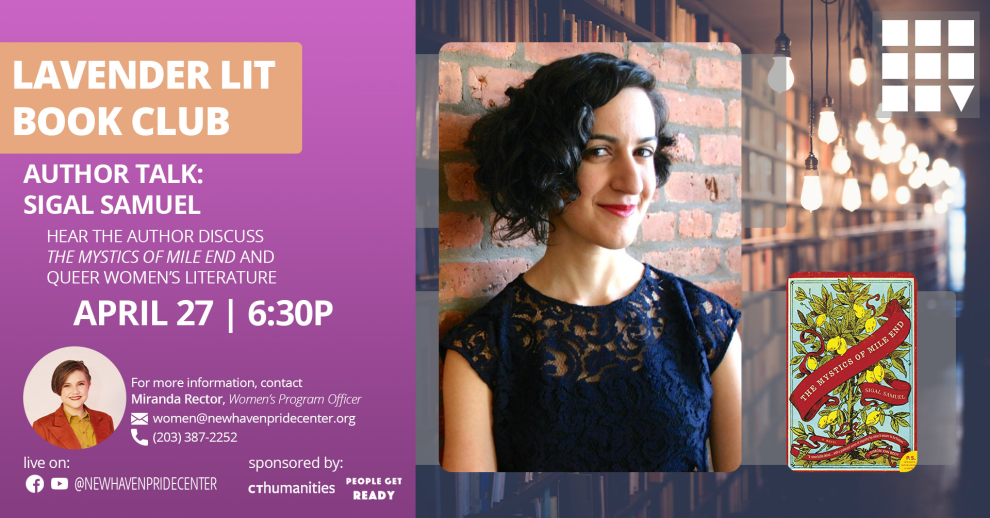 This program will be streamed live on YouTube: youtube.com/c/newhavenpridecenter
Join us for a special conversation with author Sigal Samuel, author of “The Mystics Of Mile End”
Sigal Samuel is a Staff Writer for Vox's Future Perfect. She writes about artificial intelligence, neuroscience, ethics, and the intersection of technology and religion. Previously, she was the Religion Editor at The Atlantic. Her award-winning journalism has also been published in outlets like BuzzFeed, The Daily Beast, The Rumpus, and Electric Literature. She has appeared on NPR, BBC, and CBC. Sigal's novel, The Mystics of Mile End, tells the story of a dysfunctional family dealing with mysticism, madness, and mathematics in Montreal. It was nominated for the International Dublin Literary Award and won a Canadian Jewish Literary Award. Sigal earned her MFA in Creative Writing from the University of British Columbia and her BA in Philosophy from McGill University.
As part of our ongoing Lavender Lit Book Club, exploring LGBTQ+ women and femme authors, the Center sits down, virtually, with Sigal Samuel to discuss her writing and talk about the intersection of LGBTQ+ identity and religion. This conversation will be moderated by Miranda Rector, Women's Program Officer for the New Haven Pride Center.
ABOUT THE PROGRAM
The New Haven Pride Center provides educational, cultural and social enrichment programming for the LGBTQ+ community, its allies, and members, to make a positive contribution to the entire community of Greater New Haven. To find out more visit newhavenpridecenter.org
This program is a part of our Arts, Culture, and Humanities programming as well as our Women's Programming. For more information about these types of programs, please contact Miranda Rector at women@newhavenpridecenter.org for more information.
Share