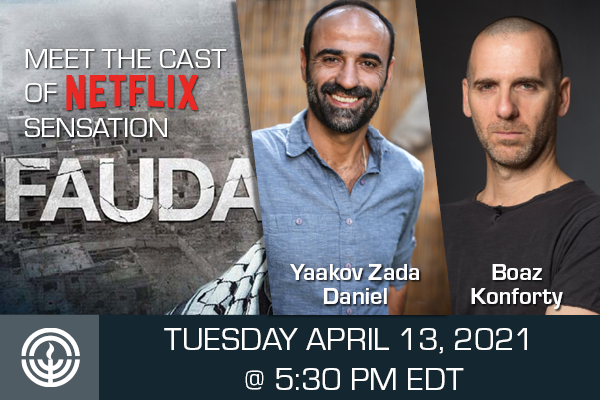 Register in advance. Since its 2015 premiere, millions across the globe have closely followed the fictional story of the Israeli unit commander Doron Kavillio as he fights terrorists threatening the security of the Jewish State in the award-winning Israeli Netflix series Fauda. Fauda, which is an Arab word meaning chaos and Hebrew slang for a mission gone wrong, aims to depict the two-sided story of the Israeli-Palestinian conflict.

Filmed in the West Bank and Gaza Strip, this series portrays its characters as both human and deeply flawed, thus garnering an audience across the political spectrum. Zoom in with us and meet the cast, actor Yaakov Zada Daniel, who plays one of the members of the elite IDF anti-terror unit in the show, and Boaz Konforty who plays Avihai, a member of the counter-terrorist unit who is always ready to jump into action. The stars will share their experiences on the show and answer questions from the host, Jewish Federation of New Bedford Executive Director Amir Cohen.