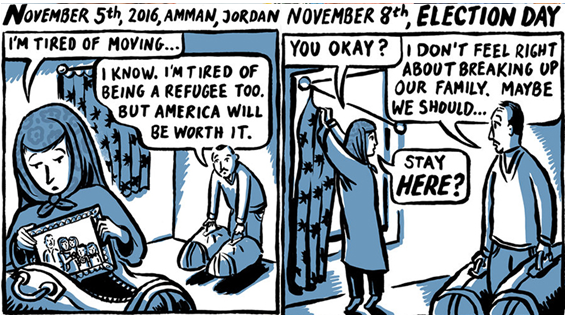 Join a private discussion with journalist Jake Halpern and illustrator Michael Sloan, the Pulitzer Prize winning team and co-creators of “Welcome to the New World,” a graphic narrative series featured in the New York Times.

The series follows the lives of two Syrian refugee families after their arrival in the U.S. on election day, November 2016.

Also joining the discussion will be Issa and Aminah, the Syrian mother and father of one of the families depicted, and Chris George, IRIS’s Executive Director.

Event attendees will participate in an interactive, behind the scenes discussion of the intensely creative and collaborative process of the Pulitzer Prize winning team of Halpern and Sloan.