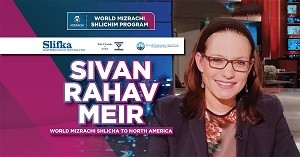 Join us for a talk led by key speaker Sivan Rahav Meir as she discusses the topic: Intersectionality and New-Media in Israel.