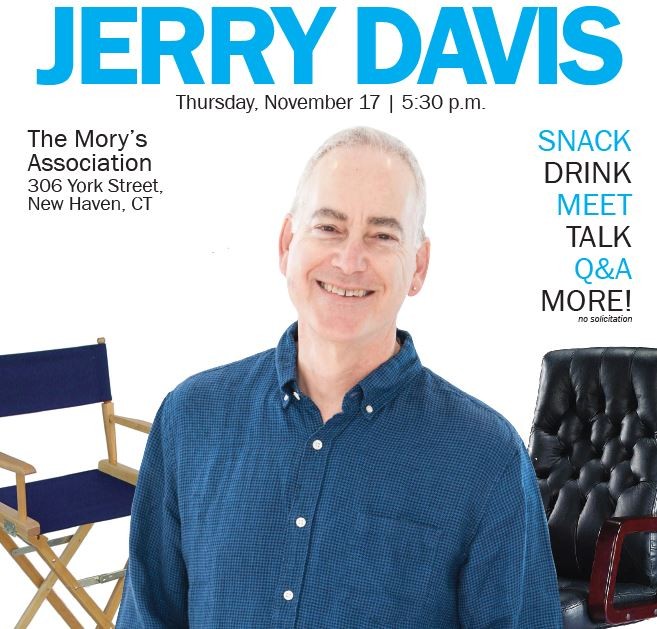 Join us for happy-hour style nosh and drinks with the Jewish Business League and Jerry Davis, producer of hit films such as Ice Age and Toy Story. Jerry will talk about the connection between movie-production and running a business in "Be a Movie Mogul –What Movie Producing Can Teach You About Running Your Business”. Limited seats are available, at the Mory's Association in Downtown New Haven.

Jerry Davis has been a leader of creative enterprises of all kinds. Since 1991 he has been in the forefront of animated movies, beginning as an executive on Pixar’s original Toy Story and continuing with Warner Bros.’ Iron Giant I and Fox’s Ice Age. He produced the animated movies Robots (2005), Everyone's a Hero (2006), Space Chimps (2008), and Epic (2013).  He served as Chief Creative Officer for Starz Animation and developed movies at Warner Bros and Walt Disney Studios. He’s a former board member of the Producers Guild of America and gave his first TEDx talk in 2015 about creative leadership. Jerry was mentored by legendary Broadway producer Alexander H. Cohen and went on to produce four successful off-Broadway shows. Today he is Managing Partner of Davis Realty in Madison CT, and with his wife, author Katie Davis, leads the Institute of Children’s Literature, the foremost teacher of new children’s writers in America (founded in 1969), and its sister school the Institute for Writers. He is also a proud published author himself: Little Chicken's Big Day (Simon & Schuster).