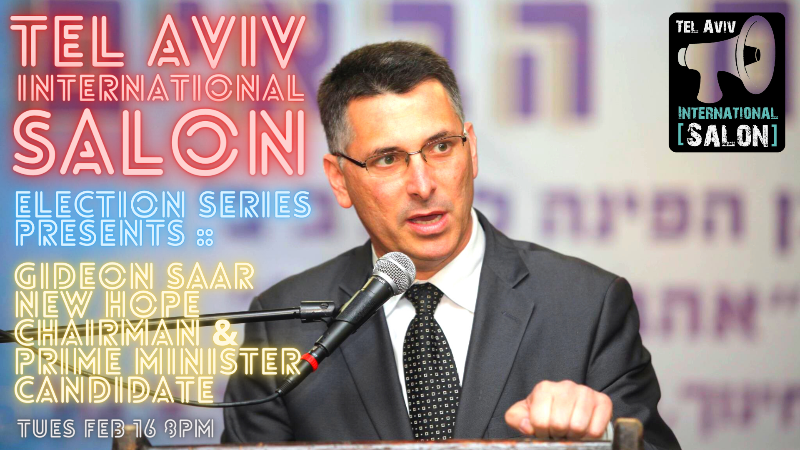 Free Online event will be held in-English + Q&A. Online viewing link will be sent to all who RSVP

About Our Speaker: Gideon Saar

Gideon Saar, is head of the New Hope Party, and according to most current polls, a potential candidate for Prime Minister.

At the age of 32, Saar was appointed Cabinet Secretary, a position he held in both Netanyahu and Sharon’s first governments. He was first elected to the Knesset, in December 2002, and served as Chairman of the Likud Parliamentary Faction, and Coalition Chairman. Saar was vocal against the Disengagement Plan, after Sharon’s departure, Saar led Likud in the Opposition. In 2009, Gideon Saar was appointed as Minister of Education and served as a member of the Security Cabinet. In 2013, Saar was appointed Minister of the Interior, working to reform planning and building and worked to strengthen Israel’s socio-economic periphery. He also fought against the situation of illegal infiltration across Israel’s borders. After taking a break from politics, Saar returned to the Knesset in 2019, and served on the Foreign Affairs and Defense Committee, the Subcommittee on Intelligence and Secret Services, and chaired a subcommittee of the Foreign Affairs and Defense Committee on Judea and Samaria.

Saar has advocated; extending maternity leave; changing the method of electing judges to the Supreme Court; granting the court's authority to dismiss an indictment and to acquit a defendant treated unjustly by the authorities; ensuring proper representation of women in municipal corporations and on the boards of municipal companies; and more.

Saar served in the IDF as combat soldier in Golani, and after suffering an injury served as an intelligence officer in the brigade. On completing his army service, he graduated with honors with a bachelor's degree in political science, and later a law degree from Tel Aviv University. He is married to Geula Even-Saar, father of Daniela, Alona, David and Shira, and grandfather of Nimrod. He lives in Tel Aviv. Want to connect directly with the New Hope party? You can register directly with them here: bit.ly/3b3Z7T8

Who you wanna party with this election?

As you all know, the Tel Aviv International Salon hosts the leaders of Israeli political parties each election cycle speaking in English, but that isn't enough.

As non-partisan honest brokers we also source hundreds of Olim volunteers for the parties' election headquarters. These are great access points for Olim to enter politics and helps to raise our community's voice across the political spectrum. We have gotten thousands of Olim engaged over a decade of work with Israeli politics, but we still have a lot more work to do.

Our community is 70,000 strong and growing everyday, so please email us at info@TLVSalon.com and let us know inside which party you would like to lend a helping hand.

ELECTIONS NOTICE: The Salons are a politically unaffiliated, honest-broker organization and as such we do not support any candidate or political party. We are proud to have a long tradition of hosting the leading candidates from all sides of the political spectrum during local and national elections to speak, debate and discuss the important issues that our entire community cares about. Specifically, we have always invited every major candidate for Prime Minister to have a stage speaking to Olim and the international community in Tel Aviv. Please take to heart that no matter whom you support, don’t forget to vote March 23rd!

The Tel Aviv International Salon is the largest speakers forum in Israel. Our nonprofit organization was established in 2009 to provide a challenging, thought-provoking and intellectual discussion non-partisan platform for the young adult Tel Aviv International and Sabra community. There are an increasing number of motivated young professionals who are choosing to make Tel Aviv their home. The Salon provides this community a unique forum to learn about, debate and discuss Israeli, Jewish and world politics, history, media, economics, social, cultural and environmental issues with a diverse range of engaging international decision-makers and the leading influencers on our society.