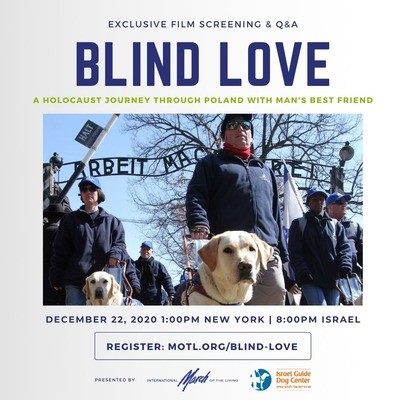 You are invited to an exclusive screening of the International March of the Living documentary film, “Blind Love: A Holocaust Journey Through Poland with Man’s Best Friend”, airing on Tuesday, December 22, 2020 at 1:00PM EST.

Following the 28-minute film, there will be a very meaningful conversation with the film’s producer and International March of the Living Educational Director, Eli Rubenstein, and a March of the Living alumna from the Israel Guide Dog Center for the Blind.

Blind Love recounts a trip to Poland of six blind Israelis and their guide dogs who took part in the annual March of the Living, where they visited once thriving sites of Jewish life and culture. On Holocaust Remembrance Day, the blind participants and their guide dogs marched from Auschwitz-Birkenau in memory of the victims of Nazi genocide and against prejudice, intolerance and hate.

The program will be conducted in English with optional Spanish translation.

The Q&A portion will be recorded and posted on our website following the program, however the film will not be posted publicly so make sure you tune in live to watch.