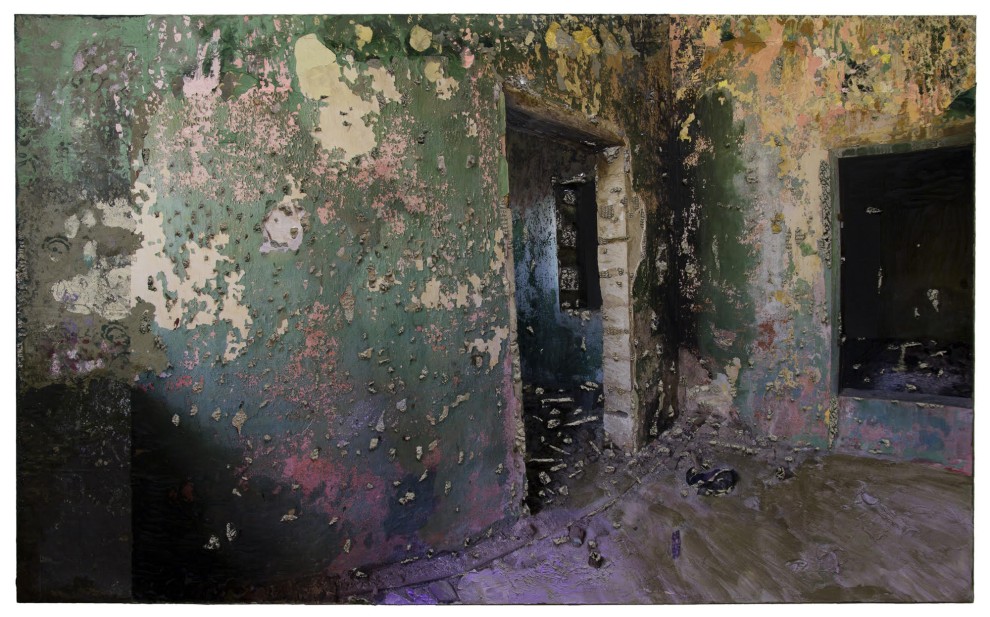 The paintings in Naomi Safran-Hon’s exhibition depict neglected rooms, halls, and passageways with traces of their former inhabitants and the external forces that brought about their desolation. Through creating these paintings, the artist reflects on a complicated relationship to her homeland, Israel.

In these pieces, Safran-Hon combines photographs of abandoned homes in Wadi Salib, a neighborhood in her hometown of Haifa, with cement, fabric, lace, and acrylic paint. These structures, which were the homes of Palestinians until the Arab-Israeli War of 1948 and the creation of the State of Israel, stand as ghosts of the past in a neighborhood that has never recovered. Through the process of making her work, Safran-Hon reconstructs these buildings and asks the viewer to reconsider our ideas of home and belonging.

The gallery space at BEKI, Safran-Hon hopes, will draw these questions of home and belonging into a Jewish context, evoking the role of the congregation as a spiritual home, and of the synagogue building as a symbolic home in our tradition, as well as the political and ethnic ideas behind the making of a Jewish collective Home.

Safran-Hon will give an in-person talk about her work on Saturday, April 2 at 12:45 pm. Sabbath rules will be observed. Her exhibition will run through June 4. To arrange a time to visit the galleries, email office@beki.org