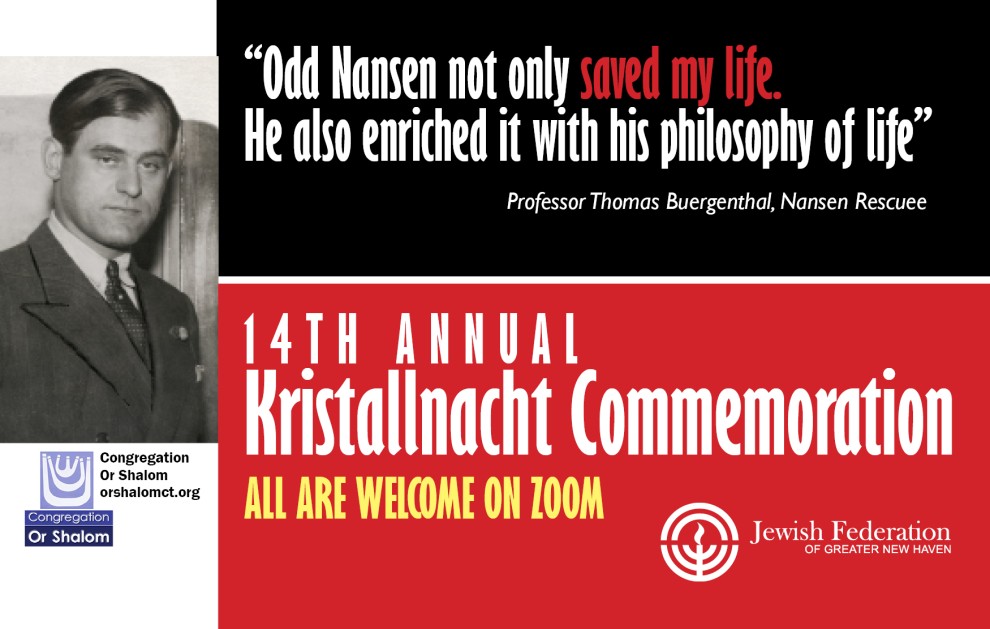 Register in advance and join us for our annual community-wide Kristallnacht Commemoration, on Zoom!

This year, we will honor the conscience and heroism of Odd Nansen.

Before Norway was invaded by Nazi Germany, Odd Nansen financed and operated a shelter in the Norwegian capital for Jews who faced imminent death in Nazi-occupied Europe.  In 1940, after Norway was overrun by Hitler’s forces, the Gestapo arrested Nansen for his continuing anti-Nazi activities. Nansen was ultimately deported by the Nazi regime to the infamous Sachsenhausen concentration camp in Germany.  It was there, at Sachsenhausen, that he courageously kept a secret diary in which he documented and skillfully sketched the daily brutalities he endured and witnessed.  The diary, which Nansen managed to smuggle out of the camp page by page, is an important testimony to the horrific realities of the Holocaust.  Odd Nansen’s final act of wartime courage came when he risked his life to save Tommy Buergenthal, a Jewish 10-year-old who arrived in Sachsenhausen after miraculously surviving the death march from Auschwitz.  “Tommy” today, is Professor Emeritus Thomas Buergenthal of George Washington School of Law. Years later, Professor Buergenthal would write: “Odd Nansen not only saved my life; he also enriched it with his philosophy of life.”

After the war, Odd Nansen’s diary fell into obscurity.  It was recently re-published by Tim Boyce, Esquire, the former managing partner of an international law firm in Charlotte, North Carolina, in 2016.

The annual Community Kristallnacht Commemoration is presented by Congregation Or Shalom, in Partnership with the Jewish Federation of Greater New Haven. Mr. Boyce will be the guest speaker at this year’s virtual event.  Senator Richard Blumenthal, standing on the bimah of Congregation Or-Shalom in Orange, will present Odd Nansen posthumously with a U.S. Senate Commendation, to be received virtually by his family in Oslo. Spiritual leader of Congregation Or-Shalom Rabbi Alvin Wainhaus and Jewish Federation CEO Judy Alperin will emcee.