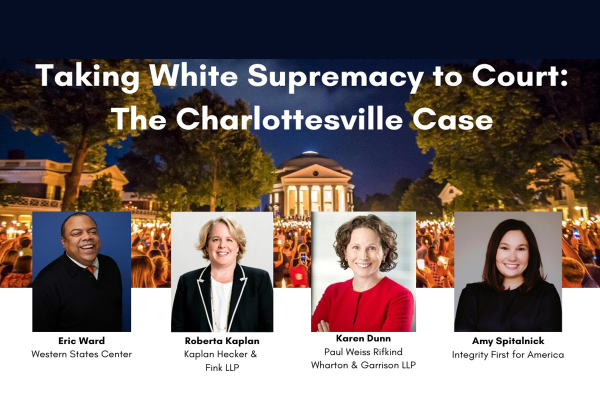 Three years ago this August, neo-Nazis and white supremacists descended on Charlottesville, VA for a weekend of violence. This violence was no accident – rather, it was the result of months of planning. And it served as a harbinger of the cycle of white supremacist violence that has followed.

Integrity First for America (IFA), in partnership with a world-class legal team, is uniquely taking on the neo-Nazis, white supremacists, and hate groups at the center of this violent movement, holding them accountable in federal court for the violence they brought to Charlottesville in 2017.

IFA’s lawsuit — scheduled to go to trial this October — details how these extremists conspired online to orchestrate a weekend of violence, which resulted in Heather Heyer’s death and extensive injuries. It provides a tangible way to take action against the white supremacy and extremism that’s poisoning this country and has the potential to bankrupt and dismantle the leaders and hate groups at the center of this movement — which is key, given their disturbing connections to the broader cycle of white supremacist violence.

Taking on, and taking down, these violent extremists is all the more critical as we see them try to exploit recent protests to spread disinformation, hate, fear, and violence.

Join Eric Ward for a conversation with IFA Executive Director Amy Spitalnick and attorneys Roberta Kaplan and Karen Dunn about this landmark case and the fight against white supremacy, anti-Semitism, racism, and other forms of hate.