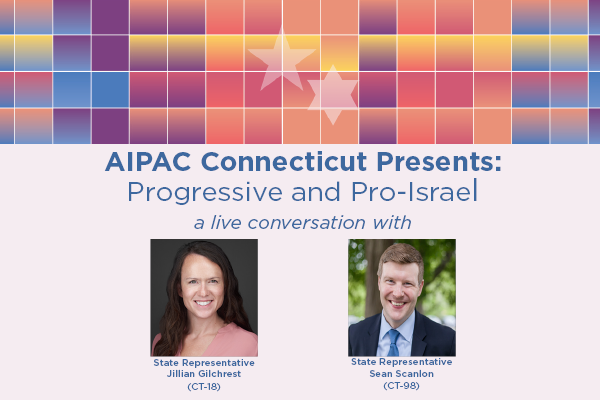 Please join the AIPAC Connecticut community for a live conversation with State Representative Jillian Gilchrest (D-West Hartford) and State Representative Sean Scanlon (D-Guilford). Representatives Gilchrest and Scanlon will share takeaways from their trip to Israel for the Progressive Leaders Educational Seminar, sponsored by the American Israel Education Foundation (AIEF), the charitable organization affiliated with AIPAC. They will also discuss how progressive values play a role in their pro-Israel activism.

JILLIAN GILCHREST was elected to represent the 18th District of West Hartford in the Connecticut General Assembly in 2018. Prior to being elected, Jillian served as the Director of Health Professional Outreach for the Connecticut Coalition Against Domestic Violence and Chair for the State’s Trafficking in Persons Council. Jillian served as the Executive Director of NARAL Pro-Choice Connecticut and Policy & Communications Director for the Connecticut Alliance to End Sexual Violence. She helped draft Connecticut’s landmark campus sexual assault policy, the first of its kind in the nation. Jillian holds a Masters Degree in Social Work with a focus in Policy Practice from the UConn School of Social Work and currently teaches for the University of Saint Joseph, Sacred Heart University, and the University of Hartford. She resides with her husband and two children in West Hartford.

SEAN SCANLON is currently serving his third term in the Connecticut House of Representatives. The son of a police officer and a small business owner, Sean graduated from public schools and Boston College before serving as an aide to Congressman and then U.S. Senator Chris Murphy for ten years. He is chairman of the legislature’s Insurance and Real Estate Committee and serves on the Public Health and Finance committees. He lives in Guilford, Connecticut with his wife Meghan and son Jack.