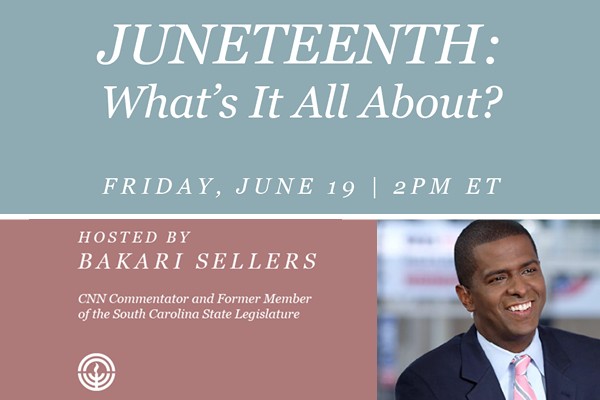 This Friday, Americans around the country will celebrate Juneteenth, a holiday commemorating June 19, 1865 and the ending of slavery in Texas, which was the last state to officially free slaves. This year, the annual celebration of freedom comes as the country grapples with its long-standing history of systemic racism, as well as the fate of its Confederate monuments, flags and symbols amid nationwide protests against police brutality and racism after the death of George Floyd. Join a conversation with three top political analysists on Friday at 2 PM ET to learn more.

Bakari Sellers, CNN contributor and former member of the South Carolina State Legislature.
Tiffany Cross, Resident Fellow at the Harvard Kennedy School’s Institute of Politics and former D.C. Bureau Chief for BET Network and Associate Producer for CNN
Dr. Jason Johnston is a professor from the School of Global Journalism and Communication at Morgan State University in Baltimore, Maryland, and Politics Editor for The Source and The Root.